Sense and sensibility: An old Cape Town farm in a new era

Sense and sensibility: An old Cape Town farm in a new era

Around 10% of global Sauvignon plantings are located in South Africa. Christian Eedes pays a visit to prominent Durbanville estate Diemersdal to discuss its take on the varietal with winemaker Thys Louw.

Durbanville is a town in the Western Cape province of South Africa, about half an hour’s drive northwest of the Cape Town central business district. It becomes increasingly built up as more and more people seek to live and work in the city’s greater metropolitan area, but long established wine farms continue to exist on its immediate outskirts.

To resist urbanization, farmers are compelled to perform at their best constantly. Diemersdal is a Durbanville farm that was first granted in 1698. Wine was made here almost immediately as an inventory from 1706 attests, mention made of a wine press, barrels and bottles. The property has been owned by the Louw family since 1885, with current winemaker Thys the sixth generation to work this land.

It’s only recently however that the Louws decided to make wine their primary focus. Until Tienie Louw, present owner and father of Thys took over, Diemersdal was a mixed farm – wine was sold in bulk for maturation offsite up until the late 1980s. Production grew slowly from that point until Thys joined full-time in 2006 when things started to change dramatically… 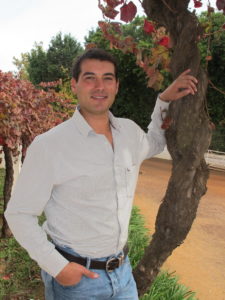 Today, the family tends 200 ha of their own vineyards while also managing a further 130 ha of vineyards under long-term rental. While the wine portfolio is broad, this is first and foremost a Sauvignon Blanc cellar, in large part due to its close proximity to the Atlantic Ocean and the cooling effect on the vineyards that this has. Of the 330 ha in total that the family farm manages, 140 ha are planted to Sauvignon and they make wines from this variety under 10 different labels across a wide range of prices. On Louw’s arrival at Diemersdal 12 years ago, total production of Sauvignon amounted to 15,000 bottles whereas it is now 1.5 million.

The growing popularity of Sauvignon

Diemersdal’s commitment to Sauvignon is also partly a matter of coincidence – the mid-2000s was the point that Sauvignon Blanc was just coming into vogue in South Africa and its popularity has simply not stopped growing since then. “Consumers like Sauvignon Blanc because its’s easy to understand with its overt aromatics and generous fruit and that makes them feel more confident – they want to know what they’re buying,” Louw says.

He adds that the variety also makes sense business-wise as it provides a decent crop (8 – 12 tons per hectare) with no negative effect on quality. He qualifies this by saying that there are only a few regions with the necessary climatic conditions that can really do it well in South Africa.

Louw relates that Diemersdal is farmed without irrigation and is adamant that this should always be the case. “With dryland farming, the vines’ roots extend down four to five metres into the soil whereas with a dripper line, the roots are concentrated around the water source.”

He also says that whereas the tendency in the South African industry is for producers to spend money  on their cellars, the focus at Diemersdal is to invest heavily in treating the vineyards to ensure optimal soil analysis – lime spreading to increase pH done according to GPS every three to four years.

A Sauvignon style to suit all tastes

Despite his family’s significant farming heritage in Durbanville, Louw is very much the businessman. “International consumers struggle to buy South Africa, let alone any sub-region. I’m not very sentimental about having Diemersdal on the label as it’s too difficult to pronounce,” he says. One of his most successful export labels is the lightly wooded Leaf Plucker Sauvignon Blanc, named after the sheep that roam the vineyards in early summer eating leaves and thereby performing a suckering role – production of this runs to 400,000 bottles. The wine is matured for three months, 10% in old 500-litre barrels and the rest on staves and sells for around ₤7.99 a bottle in UK supermarkets.

Ever the innovator when it comes to Sauvignon Blanc, Louw introduced a new wine under the label of “Winter Ferment” in 2017. Press juice is kept at -20° C  and then defrosted after four months leading to a massive increase in thiols (chemical compounds that give rise to the tropical fruit aromas in Sauvignon). The resulting wine is not exactly subtle but is already finding favour with critics and punters alike.

For aficionados of the variety, Louw makes two top-end wines from the same vineyard planted in 1982. The first is called MM Louw, fermented and matured for 11 months in French oak, 40 to 50% new. Always a powerful wine, it demonstrates that Sauvignon doesn’t always have to be light and fresh.

The second version is called Wild Horseshoe, named after these artefacts which are regularly dug up on the farm, and the production process involves fermentation on the skins for four days. Immensely complex, it’s something intended for wine geeks, and while Louw is the first to acknowledge that Sauvignon Blanc can serve a purpose as a cash cow, he is also keenly aware that with the right treatment, it can make truly profound wines. 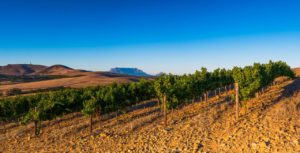 Dry-land vines Diemersdal with Table Mountain in the distance.

About the Author: Christian Edes