The 2019 Concours Mondial du Sauvignon has registered a new record number of entries. 1,010 Sauvignons from 26 producer countries will compete in Udine from March 8-10. The numbers have almost doubled since the start of the competition in 2010 when 512 wines from 17 countries took part. 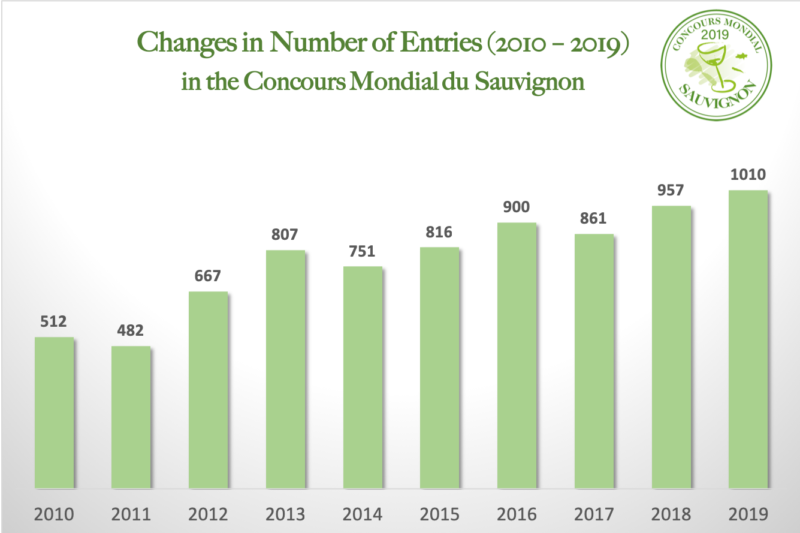 “Sauvignon is much more than a passing fad – it is enjoying long-lasting success. Its diversity, freshness and broad range of aromatics make it a very popular grape variety with consumers”, said competition director Thomas Costenoble.

After last year’s slight decrease in entries due to spring frosts in 2018, France is on the rise again with 528 wines entered, accounting for over 50% of total entries. Bordeaux and the Loire Valley posted respective increases of 36% and 22 % compared to 2018, whilst entries from South-West France and Languedoc-Roussillon dropped by 9.5% and 33%. 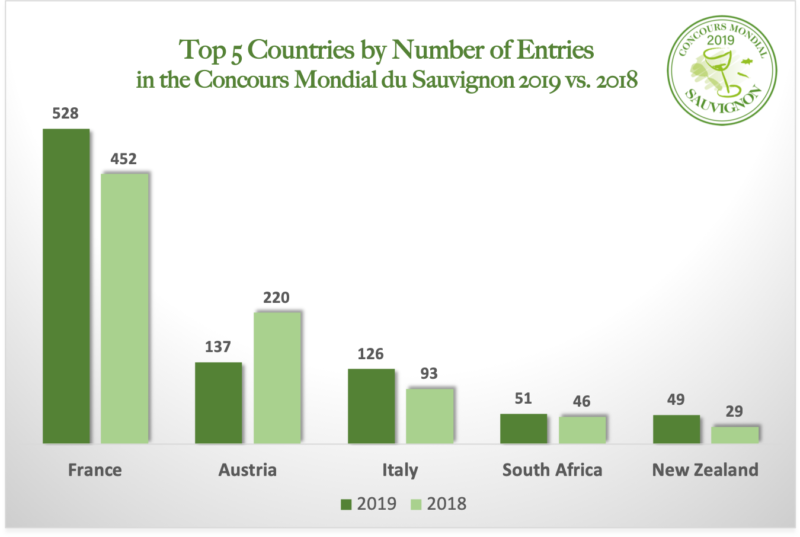 With 137 Sauvignons almost exclusively from the region of Styria, previous host country Austria has managed to hold on to the strong second place it rose to in 2018.

In 2019 South Africa and New Zealand showed their strongest participation since the beginning of the competition. With 51 wines and growth of more than 10 % on last year, South Africa remains fourth in terms of entries. With 49 Sauvignons, a surge of almost 70 % on 2018, New Zealand is back in the top five, overtaking Spain.

Sauvignon 2019, which recently gathered world experts in Marlborough to discuss key issues for the future development of New Zealand Sauvignon, turned the spotlight on the diversity of styles currently being produced. It also underscored the willingness of the industry to move forward through innovation and by constantly ramping up quality.

For the first time since 2016, Chile showed a rise in entry numbers with over 50% more wines entered in 2019 compared to last year. Numbers from Spain on the other hand decreased, totalling just 38 entries in 2019 (-7.3% vs. 2018). The reason for this may be that many wines are not ready yet due to the late harvest in 2018. Abundant rainfall in winter and spring led to a plentiful harvest last year and many vines that were severely damaged by frost in 2017 were able to recover. But with so much rain, grape growers were forced to redouble their efforts in the vineyard to curb excess canopy growth and a sharp increase in fungal diseases and botrytis. As a result, ripening and picking times were delayed.

The declining participation of Eastern European countries between 2016 and 2018 has been reversed this year thanks to the highest ever number of entries from Slovakia. The country accounts for over 35% of Eastern European entries in 2019. Also, the Republic of Moldova joins the competition for the first time this year.

After a four-year break, Australia and Argentina are again taking part in the Concours Mondial du Sauvignon.

The results of this year’s competition will be announced during a presentation at ProWein in Dusseldorf, on March 17 at 4 pm in Hall 13.