March 18, 2018 (Brussels, Belgium): The 9th Concours Mondial du Sauvignon was hosted by the city of Graz in Austria, on March 2 and 3, 2018. A total 958 wines from 26 countries were judged blind by a panel of 70 international experts from 18 countries. The judges – journalists, buyers, winemakers and producers – awarded a total 289 medals, including 6 Revelation trophies*. Medals were divided between 113 Gold (France, Austria, New Zealand, Germany, Slovakia, Spain, Italy, Bulgaria, Greece, South Africa, Romania and the Czech Republic) and 176 Silver (recipients included Portugal, Serbia and Slovenia). The host country Austria made a very strong appearance this year, ranking second for the number of medals, immediately after France. 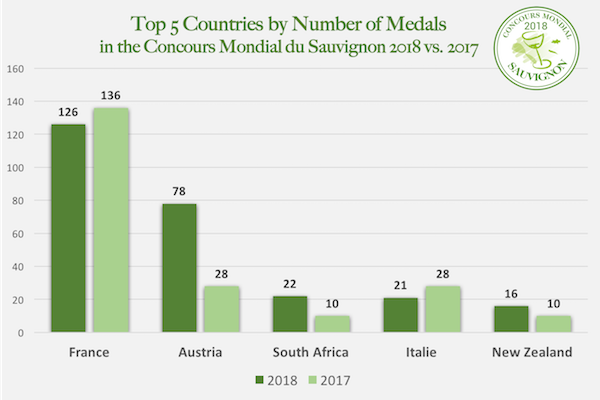 “This great triumph for Styrian wine confirms our success for the past two years in this most important international Sauvignon Blanc competition”, comments Stefan Potzinger, Chairman of the Styrian Wine Marketing Board.”At the same time, it underlines the high quality approach of the Styrian Wine regions, which, together with the quality-focused winegrowers, results in some of the best white wines in the world.On the one hand, these achievements allow us to look positively towards the future, but on the other, they are not laurels on which we will rest, but rather an incentive to become even better in order to make Styrian Sauvignon Blanc a globally renowned brand. The Concours Mondial du Sauvignon is an excellent platform to prove the quality of Styrian Sauvignon Blanc.”

In addition to Gold and Silver medals, special Revelation trophies were awarded to wines securing the highest scores, recognising the excellence of Sauvignon blanc in the relevant categories.

In 2018, Concours Mondial du Sauvignon introduced a new Revelation category for the best sweet Sauvignon from the competition.

* The 6 Revelation trophies went to:

To see the full list of winners, visit: http://results.cmsauvignon.com/

For its 10th anniversary in 2019, the Concours Mondial du Sauvignon will return to Friuli Venezia Gulia (FVG) in Italy, which successfully hosted the first competition to be held outside France in 2015.

“The reasons for choosing Friuli Venezia Gulia to host the Concours Mondial du Sauvignon”, explained Regional Minister for Agricultural Resources Cristiano Shaurli, “are a source of great pride for us, as they are linked to the continuous growth in the quality of our wines, starting with Sauvignon, and our capacity for organization and hospitality demonstrated the first time around in 2015. This is a cause for satisfaction that I want to share with our winemakers and the consortium: by working together, we have shown that to overcome challenging moments, complaining is not necessary. We need to strongly believe in our abilities and the great quality of our products.”

“We are proud”, commented Adriano Gigante, Vice-President of the DOCFVG Consortium, “that a small region like Friuli Venezia Giulia, can represent Italy in an international competition, where almost a thousand entries come from countries across the globe”. 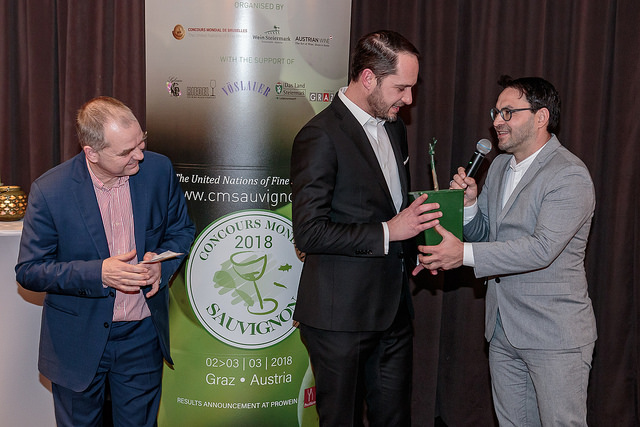 True to the tradition of the Concours Mondial du Sauvignon, Stefan Potzinger handed Cristiano Shaurli a Sauvignon vine from Styria to be planted in the vineyards of Friuli Venezia Gulia.